Second Anniversary of Commercial Operation of Nemo Link, a High-Voltage DC Power Transmission System between the U.K. and Belgium

Let me introduce a cable system that we delivered and completed in Europe.
The other day, Elia (based in Belgium) issued a press release, which stated that Nemo Link, a project in which Elia invested with National Grid (based in U.K.), commemorated the second anniversary of its commercial operation and that Nemo Link has performed very well. This is very good news for Sumitomo Electric, which delivered the cable system for this project.

Nemo Link is a high-voltage direct current (DC) power transmission system between the U.K. and Belgium. We delivered and completed a 400 kV DC XLPE insulated cable, which was the world's first and highest-voltage DC XLPE insulated cable. The press release stated that power of as much as 12 TWh was transmitted mainly from Belgium to the U.K. since the commencement of power transmission in January 2019. It also reported that the load factor of the cable system was 97.5%, which represented the most efficient operation of its kind in the world.

Nemo Link is the project in which we became the first Asian manufacturer to be selected to offer an interconnector between the two countries, which comprises part of the most important social infrastructure in Europe. This news made me feel very proud because I could learn that our products and services have contributed to the most efficient operation of its kind in the world. This cable system is expected to play a key role as local social infrastructure over the long term.

The success of Nemo Link has boosted the reputation of DC XLPE insulated cable in Europe in terms of engineering capability and reliability. This fiscal year, we have won a contract for two high-voltage DC power transmission systems, worth more than 60 billion yen in total, for Germany. We will promote the project safely and reliably. We will ensure coordinated efforts in-house and cooperation with partners toward completion.

Efforts to achieve a clean energy society, including the development of renewable energy, have been accelerated. Many large projects are scheduled around the world, including Europe. In Japan, more offshore windfarms and DC interconnectors are expected to be introduced. As the only Japanese cable manufacturer with a track record in operation of DC XLPE insulated cables, we will continue to contribute to building important power transmission infrastructure around the world by harnessing cutting-edge technologies refined through many years of research and development and delivering many products. 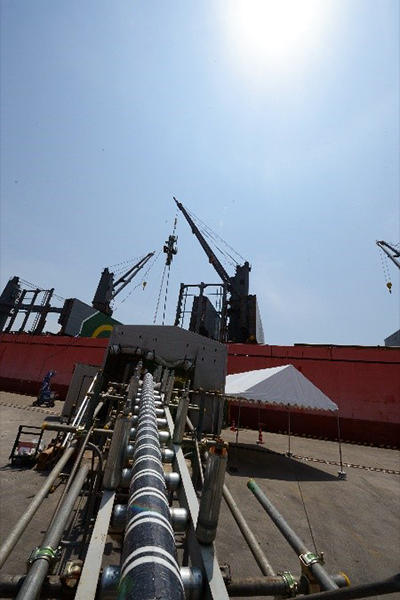 ・Sumitomo Electric contracts with 50Hertz, an Elia Group company, to replace the 400 kV Germany-Denmark Interconnector land cable on the German side.
https://sumitomoelectric.com/sumitomo-electric-contracts-50hertz-elia-group-company-replace-400kv-germany-denmark-interconnector

High Expectations for the Future Success of 35 Managers!

Presentation of the Excellent Partner Award

Three of Our Members Win First Prize at the 105th JAAF Athletics Championships!

My Impressions of the Fuse Sprint

Inspection of Sumiden Friend, a Special Subsidiary, by Top Management

Our Appreciation for Your Support This Year

Qualified for the New Year Ekiden!

Inspection of the Environment and Energy Group by Top Management

Chosen for the 2020 Health and Productivity Stock Selection Program

Volleyball Team Serves Up a Victory for Sumitomo Electric

Appreciation for Your Support This Year

Qualified for the New Year Ekiden!

LoI Signing Ceremony with the Philippine Department of Trade and Industry

A Joint Development Effort with Nagaoka University of Technology

Inari Festival at the Itami Works

Our Volleyball Club Wins the Championship!

Sumitomo Electric Industries, Ltd. President's blog is operated by the Company. Please note the about this blog.

Read About This Blog